In Search of a Forever Family

We rescued Sadie from a difficult situation at 6 weeks of age. She was loaded with fleas and parasites. And yes, named after Sadie Robertson, of Duck Dynasty fame. 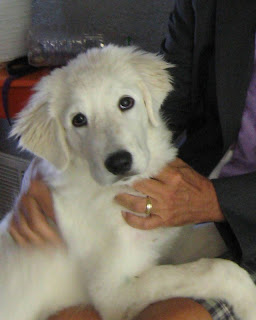 She just passed her 5th month birthday and is healthy as an ox weighing in at almost 50 lbs.

Background:  She was one of eight in the litter. Both parents are Pyrs, mom being of the regal face with three colors and dad a slender faced, all white male. Sadie is almost all white with a touch of sand on her head and mid-back.

Health/Care: She is current on all shots and we will provide evidence. She is also on Bayer-Multi for her flea and parasite containment. It is a topical solution applied monthly. Dr. D. McBride has been her vet since we acquired her. She also had her Bordatella for those that may want to periodically board her. No rattlesnake vaccine as she is a City dog currently. Due to her poorer health at acquisition, she was also placed on a high end vitamin by the Doc. She has been on Purina Pup Chow since 6 weeks.

Training: Potty--perfect in the house for almost 3 months. Will signal by waiting at back door. Never had an accident of any kind since owning her when in her confined kennel. Kenneling- Sleeps in an open top, play pen kennel at night for an 8  hour period, 9pm-5am currently. Uses the same kennel when we are away, usually no more than 4 hours. Commands- Can Sit, Stay, and Down when focused, usually treat inspired. Walks on leash for 30-45 minutes daily. Does well overall, but can tug at the outset and still thinks she can catch up to passing cars. For discipline, she can be confined in her large breed kennel or an empty, brick shed in our backyard. Usually 10-15 minutes of confinement will settle her down. 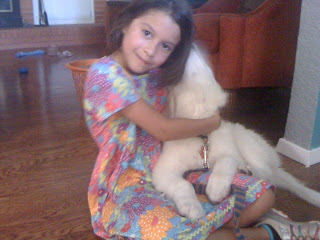 Socialization: We had our 8 year old niece living with us for 2 months. Both adjusted well to each other. Sadie can be rambunctious a couple  hours of the day, so if you have frail folks in the house (toddlers, handicapped, elderly), she may not be a good fit. LOVES adults and kids, almost to a fault. Everyone is a friend to her.

Engaged with our hens. She now towers over them and occasionally likes to play chase with them, but gives up easily. She has not been around cats, but has socialized well with other dogs (friends, boarding, etc).

They are notorious for their alerting, Orangutan-like bark. She is not abusive  about it, more likes to bark when she feels like she is missing out on something, wants to come indoors, etc. Yet to see her bark at a stranger, unless a playful one requesting their attention. Yes, she loves humans. 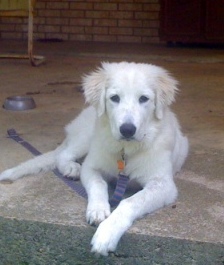 The best home: The best home would  probably be one who  has educated themselves on the Pyrenees breed. They are notoriously smart, mixed in with a dose of severe stubbornness. She has demonstrated both. Sadie can be overzealous, usually an hour in the morning then again in the evening. I surmise it is attributed to being confined to a small back yard and being the only pet. By the age of 2 though, most become known as gentle giants.

Again, she is the typical 90-10, large breed puppy behavior---10% of the time being self-absorbed feeling there should be no rules. She likes to gnaw at your hands, pull down your shorts, etc. which is signifying one of 3 things: 1) It's play time Mister! 2) I don't like when you discipline me or 3) I am tired and need to be confined. Nothing aggressive, just a quirk we have learned.

Always on the alert!

Contact:  You can contact me via email at dehboom@gmail.com or call and leave a phone message 512 948 8957. We are located in Burnet, Tx., 30 miles west of Georgetown.

UPDATE: Our lil darlin' has found her fur-ever home and is no longer in need of placement...thank you...